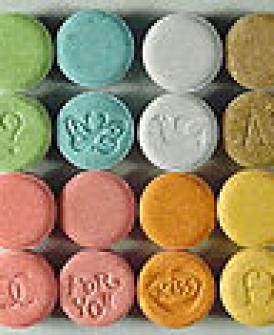 Topics in this section:


Ecstasy is the name given to a range of drugs that are similar in structure to MDMA (Methylenedioxymethamphetamine). It has both stimulant and hallucinogenic properties - in other words it can rev you up and distort your perceptions and senses.

Ecstasy is illegal, and its ingredients are often hard to get - this means that manufacturers may put other substances (such as chalk or caffeine) into the drug when they're making it. There is the chance that when you buy Ecstasy it will contain little or no MDMA or MDA (Methylenedioxyamphetamine) which has a similar effect to MDMA. On rare occasions, dangerous chemicals, such as rat poison have also been found in samples of Ecstasy. What this means is there are no guarantees about the strength or effect of Ecstasy. If you do choose to take, it, take a small sample first to check out its effects - even regular users can be caught out. If you do that, you lessen the risk of having a bad reaction to the drug.

PLEASE NOTE: According to the latest drug lab studies in New Zealand – there are no “Ecstasy” pills actually in the country –although you may be told it is, its generally either Methodrone, partypills or a range of other toxic chemicals and fillers.

What is Ecstasy and what are its effects?

The effects of any drug (including Ecstasy) can vary from person to person. It depends on many factors including a person's size, weight and health, how much and the way the drug is taken, whether the person is used to taking it and how they are feeling at the time.

It also depends on the person's environment and whether or not they have taken other drugs.

Because Ecstasy is commonly taken prior to, or during, dance parties, the stimulant effects are likely to increase. What that means is that people taking Ecstasy may dance more energetically and for longer than usual, which may increase some of the drug's more negative and possibly dangerous effects (such as dehydration).

People who take Ecstasy who have hypertension, heart disease, diabetes, liver problems, epilepsy, or a history of mental illness or panic attacks are at greater risk of physical and psychological harm.

Coming on/coming up:
Immediately after taking the drug. This is when the Ecstasy 'kicks in'. It can feel strange - a sort of mix between smooth, bumpy and jittery.

The plateau:
About an hour after taking the drug, lasting anywhere from two to five hours. The feelings are usually good, happy and relaxed.

The final stages. People may feel physically exhausted, tense, depressed, cold, anxious, paranoid and irritable. The come down usually passes after sleep (which might take a while to come), but may return in a couple of days.

Higher quantities of Ecstasy don't appear to enhance the desirable effects, but they can bring about some nasty side effects including:

No drug is ever 100% safe for all people in all situations, and some people who have taken Ecstasy have died. It is thought that Ecstasy can directly cause death in three ways:

There isn't much conclusive information about the long-term effects of Ecstasy use. However, some research indicates that mood and memory functions may be damaged by Ecstasy, which could, in turn, lead to depression and anxiety.

Steps to Avoid These Problems

It is recommended that people using Ecstasy at dance parties sip water regularly, rather than drinking it all at once. People who are dancing should drink around 500ml an hour, people who aren't should drink about 250ml an hour. Wearing light, loose clothing and taking regular rests from dancing (15 minutes after every hour of dancing) helps to reduce the risk of overheating. In these regular breaks, people should check to see that their body has cooled down, and that their breathing and heart rate are back to normal.

Warning Signs of Overheating and Dehydrating

If these symptoms start then:

Ecstasy and other drugs

Even if you aren't mixing your drugs (that is, even if you are only taking Ecstasy and nothing else at the time) it may have been mixed before you've even got your hands on it. Manufacturers can easily mix other drugs into the Ecstasy.

The consequences of mixing Ecstasy with other substances are often unpredictable.

Taking Ecstasy with other hallucinogens (such as LSD) can result in a person experiencing severe mental disturbances.

Taking Ecstasy while using some antidepressant medications can result in an extreme adverse reaction.

Overall, the health risks increase when mixing Ecstasy with other drugs, including alcohol, especially when large quantities are taken.

Where can I get help?

Youth health centres are a good place to go for help. If you don't have one in your area, talk to an adult you trust, such as your parents, your doctor, Kaumatua or Kuia, a school counsellor or a youth worker. You can also get help from an Alcohol and Drug Service (they're listed in the phone book) or ring the Alcohol Drug Helpline on 0800 787 797.

Youthline is also always here to talk and help you through whatever you are going through. You can contact us on: